Where were we come from? And Where do we go? These questions lead the human to build up religious concepts on how the Gods create the Human and the other living species.

Since the man has been civilized and started to learn new things, two un-answered questions started to roam in their minds. Where were we come from? And Where do we go? These questions lead the human to build up religious concepts on how the Gods create the Human and the other living species. However when the time goes by and the technology and science grew stronger, people were not satisfied by the religious concepts. So they started to find how the life on earth begins.

Many ideas of origins of life has been given by the philosopher’s and scientist by observing the environment. Such an idea was the Theory of Spontaneous Generation which was first challenged by Francesco Redi in 1668. And then Louis Pasteur experimented on it and concluded that “Life only comes from life”.

Stanley L. Miller and Harold C. Urey were also curious about the origin of species on earth. So they started simulate the ideas of the earliest earth in a lab in 1953 at the University of Chicago.

They started simulating the ancient water cycle, basically the precipitation, water bed like ocean evaporation and condensation, in a closed loop of vessels. Then the water was boiled by using a Bunsen burner and it created water vapor. The gases of the atmosphere were chosen to be Methane, hydrogen and ammonia with water vapors. They used a condenser to create water droplets out of water vapor to signify the rain (Precipitation).  To create thunder storms they added sparks to the atmosphere part by using two electrodes.

After a week the water or the ocean they signify became dark brown in color as many complex molecules has been produced. Amino Acid which is used to make proteins on living cells was created. But nothing which is close to living cells has been created. So their experiment was failed.

But after many years both the scientists died some students have discovered the samples of the experiment in 2007, they started to examine the samples. They found that, much amount of amino acids and complex molecules have been made on the sample than it was before. They discovered nucleotide-based adenine, which means molecules which are used to create nucleus of the cell has been grown inside the tubes. They are used to create RNA and DNA of living cells. 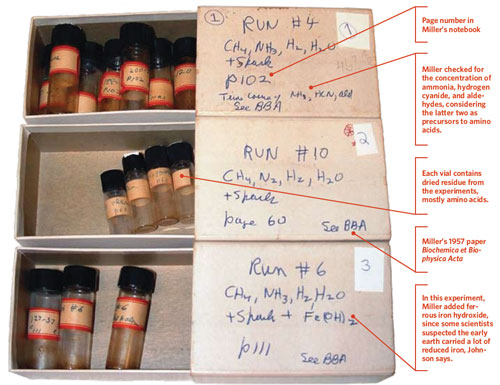 These results convinced that the Miller-Urey experiment was not actually failed but it didn’t have much time to give away the desired result. Well, think about this. The earth was not made in a week or two. But it takes billions of years to create life. But the experimental samples were only kept inside the cupboard for about 50 years.

However these new status of Miller-Urey experiment went viral throughout the world of science. The experiments on Miller-Urey’s first experiment began to perform. The famous author Dan Brown, who wrote the famous book “Da Vinci Code”, also wrote a book on the facts fetched by the new conditions of the experiment named “Origin”. And he was capable of explaining the experiment very clearly and with an interesting background story embedded in it.

Facebook launches Shops during the pandemic to bring more...

Did you know about Mr.Chamath Palihapitiya? He was a senior executive of facebook....