Researchers have observed the moon to rust and Earth is partly responsible for causing it.

A new paper, analyzing data from Chandrayaan-1 orbiter by the Indian Space Research Organization, shows that the moon's poles have a composition substantially different from the rest.

Studying the light reflected from the poles, Shuai Li, of the University of Hawaii, noticed the hematite spectral signature.

This hematite alpha is present in mars.

Hematite is a type of iron oxide, widely known as rust; however, it must be present in order for iron to become rust oxygen – something that is infamously missing from the moon.

One JPL scientist, Abigail Fraeman, said, “At first, I totally didn't believe it. It shouldn't exist based on the conditions present on the moon, But since we discovered water on the moon, people have been speculating that there could be a greater variety of minerals than we realise if that water had reacted with rocks.”

The appearance of rust on the moon, the scientists found, can be explained in three ways. While the moon does not have an atmosphere, due to the Earth's magnetic field it does have trace quantities of oxygen present.

By riding Earth's magnetic field, oxygen will travel from planet to moon, making the 385,000-kilometer journey through the magnettail.

This will explain why the moon's side facing the Earth has a larger amount of hematite than its far side.

It is also likely that more oxygen was added to the moon as it was closer to the Earth, and for billions of years the two bodies had moved farther away from each other.

Another reason for this is the sum of hydrogen on the moon. Hydrogen bombard the moon as well as the earth, flowing from the Sun via space through solar winds. 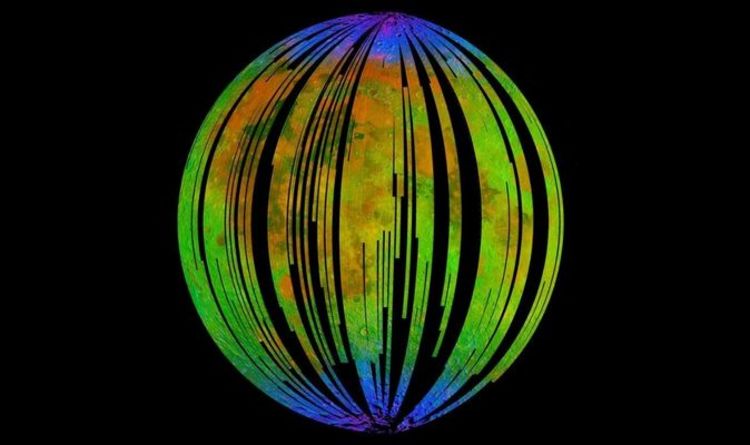 In comparison to an oxidizer that eliminates electrons, hydrogen is a reducer, which means it transfers electrons to the materials it comes in contact with.

It is shielded from this by the Earth's magnetic field, but the moon has no such protection.

However, as well as transferring oxygen to the moon, the Earth's magnetotail also blocks almost all of the solar wind movement while the moon is full. This means there is a risk that rust will grow during the lunar cycle of the moon.

The third element is the water ice present on the moon, which is located on the far side of the moon under lunar craters. Li proposed that particles of dust that frequently reach the moon could release these water molecules, combining with iron and then heating up to increase the rate of oxidation.

This will explain why hematite has been found far from the craters of the moon but further research is needed to understand thoroughly how the water interacts with rock.

Such research may help clarify why hematite has been found on other airless bodies, such as asteroids.

Today is a special day for those who are interested in what Apple are going to announce...